We were notified in Autumn last year that Virtual Running Events had been nominated for the “Best Virtual Event” category at The Running Awards by a member of the public. The Running Awards are the only one of their kind here in the UK although nominations are open worldwide. Thanks to YOUR votes, we were notified in December that we had made it to the shortlisted top 12 companies. We were up against some major virtual events companies so had no expectations in being placed in the top 3 so when we were invited to the Running Awards presentation evening on Thursday 25th April 2019 in London, we went for the experience of the night.

My wife, who has been involved in the company for the last 12 months came to London with me to the awards. On board a cruise ship, we sailed down the River Thames from Tower Bridge (that opened for us to go through) down to the O2 arena and back starting in daylight, watching the sunset and docking in darkness. The evening was an amazing night, meeting lots of big companies like Nike and Asics and up and coming companies like Tikiboo & Runderwear. We were announced as bronze, 3rd place winners for our category! We collected our trophy from BBC Sport presenter Mike Bushell who presented the awards and had our official photos taken by the organisers. We stood in amazement as people around us congratulated us, we had no thoughts that being placed might be possible.

We are still in absolute shock about coming third, there were so many major names we were up against with huge fan bases so it makes us extremely proud to know that our customer base is so engaged with what we do. It has given us the urge to face our own challenges of designing more medals, pushing the boundaries to virtual running and revelling in the amazing feedback we receive. We are very pleased that Virtual Running Events achieved worldwide recognition and it shows that hard work really does pay off and anything is achievable.

THANK YOU TO EVERYONE WHO VOTED FOR US! You quite literally made our year! 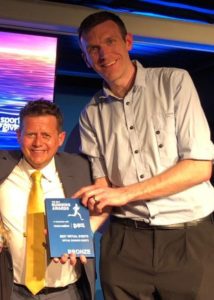 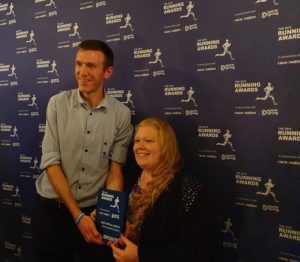